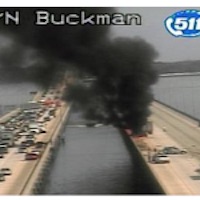 On March 2, 2015, there was a crash in Jacksonville Florida that caused the death of four people - two deaths and two children. The crash took place on the Buckman Brigde which was later shut down. The ripple effect of this crash was felt throughout the roadways of Duval and Clay County. Tragically, four people died as a result of this rear end crash involving a semi-tractor trailer and two SUVs - a Chevrolet Tahoe and a Nissan Murano.

The Florida Highway Patrol Released a Media Report following the crash with the following details:

Vehicle 3, a Chevrolet Tahoe, was stopped in the left center lane on I-295 southbound, due to a possible mechanical malfunction. Vehicle 2, a Nissan Murano, was stopped behind the Chevrolet Tahoe. Vehicle 1, a Peterbilt Truck, was traveling behind the Nissan Murano. The Peterbilt failed to stop and collided with the rear of the Murano. The Murano rotated and traveled left after the collision. The Peterbuilt continued traveling southbound and collided with the rear of the Tahoe. The Tahoe was pushed into the concrete barrier wall. and a fire ensued. The Tahoe was quickly engulfed in flames and entrapped the four occupants in the vehicle. All three vehicles came to rest in the left travel lane and left emergency lane. The interstate was closed for several hours due to this crash. No damage to the bridge was identified by FDOT inspectors.

With any Florida Automobile Accident, there are Florida Statutes that apply to the particular facts and circumstances. There are "rules of the road" that apply and should be followed. Assessing fault or liability for an accident in the State of Florida can be a complicated matter especially since Florida adopted a comparative fault standard for accidents / crashed. In other words, more than one driver can be at fault for a crash or accident; however, that does not mean that drivers have to be equally at fault. For instance, in a particular automobile accident, Driver #1 may be 95 % at fault and Driver #2 would be just 5 % at fault. Under this scenario, Driver #1 is essentially responsive for the damages and injuries associated with the crash or automobile accident.

When a vehicle stalls or malfunctions to the point of being inoperable, Section 316.072, Florida Statutes, may apply:

For the recent Buckman Bridge accident, it can be quite difficult to impossible to move a stalled vehicle from the roadway especially with traffic zooming by from all sides. In addition, there may not have been much time between the moment that the vehicle stalled out and the crash itself. While stalled vehicles in the roadway are not encountered every time that a driver travels from one destination to another, it is certainly foreseeable that this type of incident could happen. As such, all drivers including commercial truck drivers should be prepared to stop at any time especially in areas in which it is difficult to move a stalled vehice to the side of the road.

The Florida Highway Patrol identified the victims of the crash who died as the following individuals:

In the English language, there is no word to describe the family members who survive and grieve the death of a child. A surviving spouse is referred to a widow or widower. A surviving child of a deceased parent is referred to an orphan; however, no word has ever been originated or used to describe a relative whether it is a parent, grandparent, aunt, uncle or other family member who survives and grieves the death of a child. In the scheme of things, it is unnatural and something that a family never recovers one. When a child dies, there are a number of issues that family members will need to deal with in the aftermath of a crash. The book titled When a Parent's World Goes from Full to Empty - The Wrongful Death of a Child - What You Need to Know About The Florida Wrongful Death Act. You can get this book for free From Full to Empty.